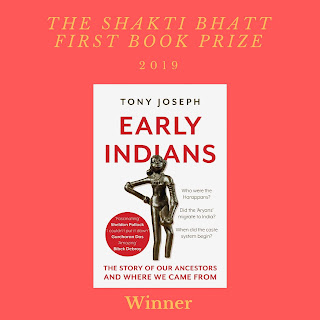 Tony Joseph’s Early Indians: The Story of Our Ancestors and Where We Came From is the winner of the Shakti Bhatt First Book Prize 2019.

Early Indians tells the story of the people of South Asia through research in six disciplines, including path-breaking DNA evidence. It puts to rest the ugly debates about the ancestry of modern Indians by revealing an undeniable truth: we are all migrants, we are all mixed.

In its twelfth year, the Shakti Bhatt First Book Prize continues to celebrate extraordinary new writing in all genres. Administered, judged, curated and funded by writers, the Prize is and will always be entirely independent, and beholden to no corporate sponsors.

Early Indians is a remarkable exploration of the origins of the first humans who occupied the Indian subcontinent, bringing together a wealth of research from population genetics, archaeology, social history, biology, linguistics and other fields that are proving deeply interconnected.
Tony Joseph’s breadth of reading helps him combine insights from older studies of the topic with the latest research, resulting in a deft, compelling and accessible narrative that does not lack in rigour. As the question of origin becomes, increasingly, a tool of politics, Joseph’s book serves as a vital corrective to those who seek to simplify this most complex of subjects.
A triumph of ambition, clarity, and style, Early Indians was our unanimous choice as the winner for this year’s Shakti Bhatt First Book Prize.

Ruskin Bond was unable to participate in this year’s judging process.

As it enters its twelfth year, the Shakti Bhatt First Book Prize continues to acknowledge literature from the many countries of the South Asian sub-continent. On our shortlist this year are one novel each from a Bangladeshi and a Pakistani writer. Despite the fact that our 2019 list comprises of five rather than six books, we are, once again, confident in the diversity of themes and genres it represents. Our selected books speak of origins and futures, of satirical masculinities and the continuing vulnerability of women in our society, of vaulting ambitions and the sweetness of dreams. Never flinching from confronting ugly truths or recognising the gossamer thread of hope, they provide a vivid commentary on South Asia’s social and political fissures, its unresolved anxieties and its contemporary concerns. 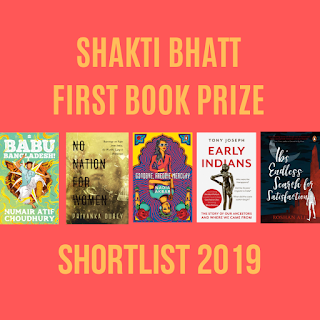 Goodbye Freddie Mercury by Nadia Akbar is set amongst the young and the restless of Lahore’s social elite where drugs, parties and even powerful political connections cannot provide an escape from the pervasive violence and rampant corruption that hang like a pall of dust over the landscape, all but suffocating a new generation’s aspirations and hopes for change.
Numair Atif Chowdhury’s Babu Bangladesh creates the biography of a national superhero who has lived through both his country’s bloody past and the threatening chaos of its imminent future. Although surreal and psychedelic, unconstrained by anything except Chowdhury’s febrile imagination, this roller-coaster of a novel wears its thrumming political heart on its sleeve.
Roshan Ali debuts with Ib’s Endless Search for Satisfaction, bringing a fresh new voice to the age-old search for the meaning of life. Cynical and utterly sincere by turns, Ali’s Ib remains an unremarkable boy who wanders close to the cusp of manhood as he considers such big questions as love and death from a distinctly 21st century urban Indian perspective.
No Nation for Women by Priyanka Dubey is a journalist’s uncompromising commitment to foreground stories of sexual violence against women in India. Dubey shows us that some of the most determined fights for justice come not from our media-saturated cityscapes but from the severely disenfranchised families of victims in rural areas. This is a timely reminder that the power to resist belongs to us all, it is both universal and democratic.
Tony Joseph’s Early Indians strides purposefully to the very centre of the battle for our history, collating evidence from genetics, archaeology and linguistics that strongly contests the version of our past being created by our current political dispensation. Joseph’s rigorous science writing can be one of the few weapons we have left against the so-called knowledge produced by ideology and prejudice.
As our democratic processes are brutally demolished and our voices of dissent are choked off, our public and private bookshelves can stand tall as spaces of resistance. Solidarities can still be created by the books that we write and read and share. This year’s shortlist is a shoutout to those spaces and solidarities.
Arshia Sattar
Shakti Bhatt First Book Prize Co-Curator
at 5:04 pm No comments:

Announcing the judges for the Shakti Bhatt First Book Prize 2019:

Sonia Faleiro is a journalist and the author, most recently, of Beautiful Thing: Inside the Secret World of Bombay’s Dance Bars (2010); her next book, The Good Girls: Love and Death in a Village in India, is forthcoming from Grove Atlantic/Bloomsbury.
Prayaag Akbar’s first novel Leila won the Crossword Jury Prize in 2018 and the Tata LitLive Award for Debut Fiction in 2017, and was developed into a series by Netflix. He is a Senior Fellow of Krea University.

Ruskin Bond wrote his first short story at the age of sixteen. Since then he has written more than five hundred stories, essays and novels, and won the Padma Bhushan, the Padma Shri and the Sahitya Akademi Prize. He lives in Mussoorie, a constant presence or character in his fiction.
at 3:34 am No comments: