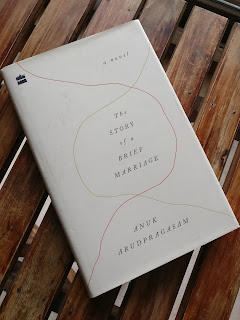 A native of Colombo, his work, according to shortlist judge Arshia Sattar, “presents the civil war in Sri Lanka like never before. Writing from within the debris of Tamil lives in prose that can pierce your heart, Arudpragasam’s protagonists find dignity as they piece together strategies of survival. The story is about the human spirit in the most desperate of times. It sings not as testament of glory but as a dirge of despair.

Judges Kamila Shamsie, Rohini Mohan and Margaret Mascarenhas were unanimous in their decision.

“Anuk Arudpragasam has written an extraordinary novel that is timely, timeless and universal in its depiction of the possibility of tenderness and love blossoming in the midst of the mind-numbing carnage, suffering and horror that is war. The Story of a Brief Marriage is mesmerizing from the first paragraph, and remains delicately poised between life and death from beginning to end,” said Mascarenhas.

Shamsie added, “It’s an exceptional accomplishment for any writer - for a debut writer it’s near miraculous.”

Mohan, winner of the Shakti Bhatt First Book Prize 2015, for her own Sri Lanka-based novel The Seasons of Trouble, said, “Anuk has taken what is actually a sliver of a story, the briefest of moments, and suffused it with meaning. His spare, meditative writing lets the pain and delirium of conflict unfold, sometimes just through an injured bird.”