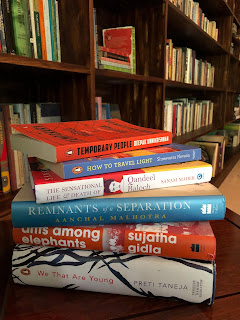 In a world increasingly “broken up into fragments by narrow domestic walls,” it’s unsurprising that this year’s Shakti Bhatt First Book Prize shortlist reflects the experience of the outsider, the one who does not fit because of sexuality, caste, class and gender and a hundred other real and imagined reasons.

This year’s judges, Githa Hariharan, Sampurna Chattarji and Raghu Karnad, will sift through some remarkable examples of such displacement.

The short stories in Deepak Unnikrishnan’s Temporary People train their lens on the lives of migrant workers in the Gulf countries. Unnikrishnan’s masterful control of both language and imagination allows him to shift planes with ease, placing the reader on a Moebius strip with a single surface where the real and the surreal are contiguous.

Sujata Gidla’s searing memoir Ants among Elephants blows the lid off any illusions we might have had about the diminishing importance of caste in the 21 st century, even in such aspirationally egalitarian spaces as the movements of the political and social Left. Gidla’s freedom lies in her escape from the existential destitution that such systemic discrimination can induce for Dalit castes in India.

In How to Travel Light, Shreevatsa Nevatia grabs us by the collar and forces us onto the rollercoaster of a life lived with bi-polar disorder. Along with Nevatia, we, too, must live the illness – its manic bursts of energy and ecstasy, its crippling lows of hospitals, drugs, doctors and diagnoses. But hope lies in the extended hand of friendship, the inclusion of the outsider, however different s/he may be.

Preti Taneja’s novel We That Are Young sweeps through the lives of three daughters who stand to inherit their increasingly eccentric father’s fortune. A bastard son makes a tentative return to this family of wealth and power and is exposed to the corruption of mind, body and soul within our country’s social elite, an elite never answerable for its crimes simply because it is protected by money.

Remnants of a Separation explores personal histories of Partition through treasured family objects and heirlooms. Aanchal Malhotra put her tools as an historian away and with immense gentleness and compassion elicits memories of homes left behind. Oral narratives of world-changing events remind us that whether a refugee or a migrant, those who are wrenched from their homes always live as exiles.

Sanam Maher’s The Sensational Life and Death of Qandeel Baloch is a testimony to the short, incandescent and courageous life of this Pakistani social media personality, murdered for the family’s honour by her brother. Through the story of Qandeel’s life and death, Maher shows us what it means to be a woman who defies convention in a patriarchal society.

As the 21 st century settles into a morass of prejudice, hatred and violence against the perceived Other, it is writers who will remind us of the essential humanity that we all share, however different the Other may look or feel or behave. Writers may not be able to change the world, but they can help us mourn for those that have been vilified, ostracised and killed. This year’s shortlisted books are verses in the elegy that is slowly but surely being composed for all those whom we don’t even know we have lost.

The shortlist was chosen by Sattar (who runs the Sangam House international writers' residency programme) and writer Jeet Thayil. The Shakti Bhatt First Book Prize is a cash award of 2 lakh rupees, and a trophy. It is funded by the Shakti Bhatt Foundation. The judges will announce the winner in November.